I have been righteously poked to include the beloved "Defrag Complete" chime at the end of a defrag, so here it is! 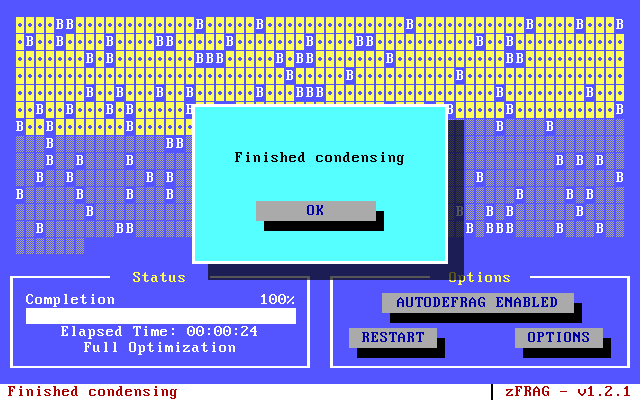 I tried to replicate the beloved (?) PC Speaker but I realized that the PC Speaker was not just the actual sound, but also the case in which the chip would resonate. So I did a bit of extra polish by doing some EQ work on the audio clip and applied some damp reverb on it, so to make it sound like it's coming not from your speakers but from "somewhere close", like a computer case!

I hope you find this little addition to be nice! Thanks again for suggesting it.

I have made some changes to the project structure! Nothing that should affect the gameplay, though.

I have been introducing C# events, something that was completely missing from earlier versions of the project.
By doing so I have, of course, realized that, if I were starting this project today, I would probably have written better, more performant code, but there you go.

I don't yet 100% like the implementation but it seems to be working so far, so I'll at least have a better starting point than before. We'll see!

While converting the code to support events, I have also got rid of the PAUSE DefraggerState in the state machine as it was getting confusing for me. I may go back to it in the future and reimplement it, but for now I think I'm far better off with just a bool check.

GREAT IDEA! I would like to give my contribution.
Original defrag tended to chain clusters from big files, it would be nice to add a color code like Norton Disk Doctor's to locate big file chunks to be able to arrange them and get some "points" maybe?  and have some sort of Final score and a Leaderboard?

Original program cannot handle unmovable system/hidden files. Along with the total files occupation it would be nice to have them selectable in the options just like the bad sectors are.

Keep up the good work! I Love the case chime!